skip to main | skip to sidebar

Good day and welcome to the bi-annual blog post
for 2017.

I know, I know .... I'm a bad blogger.   I seem to be
going at this in fits and starts, don't I?    Blame it on
retirement and being constantly tempted and
distracted by my many, many interests and passions.

Or you can just say that I'm fickle and leave it at that. 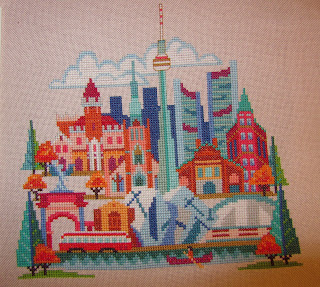 Here we have Pretty Little Toronto by Satsuma Street.

I got a huge chunk of this piece done last year and then
somehow got sidetracked (stop me if you've heard this
one before) and left it.   All I needed to do was the final
tree and bush, the top of the CN tower and the clouds
which wasn't much at all .... in the grand scheme of things.

But I left it ... and stitching in general ... until two weeks
ago when I picked it up on a whim and finished it!

I love this one and really did enjoy stitching it.  I love
bright, vibrant colours and boy do these designs have
colour in abundance. 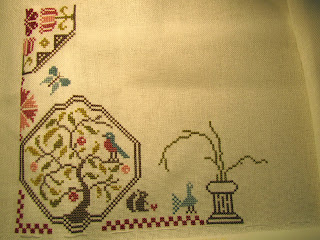 And since I was back in stitching mode I just had to
pick out another project to start and so I began working
on Jardin Prive's Sampler Aux Bouquet .... well,
one section of it anyways.   I've always loved this
design and decided that it was time I got cracking on
it.

Hmmm.   Keep forgetting to put a beak on that blue
peacock motif.    Poor guy looks like he sneezed it off
or something!

And that's the extent of my cross stitching life.   The rest
of this post will cover life in general.   If you bore easily
feel free to move on.

In February it was time once again for our annual Girls
Weekend in Toronto.   Friday morning until Sunday
afternoon spent with my friend Darlene down in the big
city seeing the sights and eating ... um .... and exploring
the cultural diversity of the downtown core. 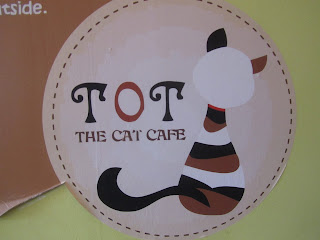 One of our first stops was a cat cafe that had opened in
Toronto about a year ago.   Like other cafes of this
type that have sprung up around the world (beginning
with the very first one in Taiwan and spreading to Japan
where there are about 50 such establishments ) it featured
a room separated from the main cafe with adoptable cats of
all kinds there to be petted and fussed over while you drink
your coffee or hot chocolate. 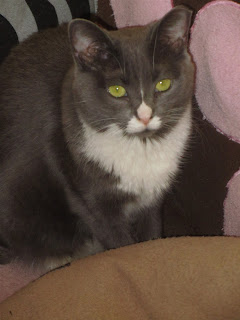 There were about a dozen cats lounging around the
space and we spent about half an hour indulging
ourselves with their company.   We were given
kibble to entice them to us and show that we were
come in friendship.   All of these cats were strays
found living on the streets and many were still
weary of strangers and unsure of their new
surroundings.

The cafe has been able to see a good number of
their cats adopted since they opened which is
good to know. 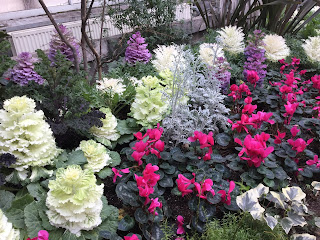 Another stop during our first day was Allen Gardens.
We go there every year to enjoy a break from the cold
and the snow and the bleakness of winter. 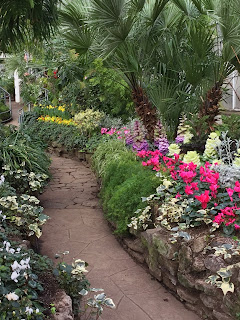 Wandering through the connected greenhouses,
drinking in the colours and the warmth and the
sounds of trickling water. 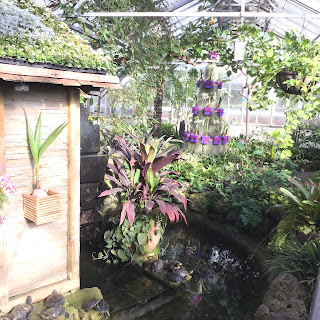 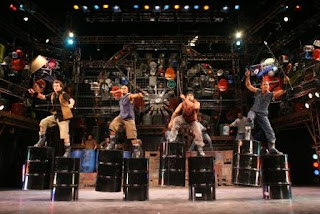 The show that we went to see this year was Stomp!
Darlene had seen a production of this show a number
of years ago and had really enjoyed it so she got us
tickets to see it during our weekend.

It was an amazing show.  Very clever.   Who knew you
could produce music from such innocuous items as
barrels, knives, plastic bags, chop sticks and the kitchen
sink?

A physically demanding show (as you can see from the
picture above) that also featured slapstick humour .... not
surprisingly.

We were very impressed and were blown away by the
performer's talent ... and stamina! 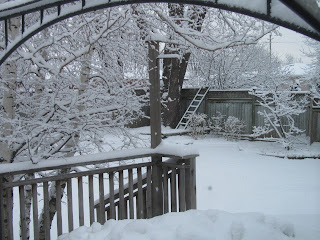 There were times when it felt like early Spring ....
in January .... and other times when ... well ..... we
almost had a white Christmas.   Two weeks before
Christmas we had two dumps of snow that seemed
to all but guarantee us the type of Christmas that
would have caused Bing Crosby to burst into song!

But alas, it rained like the dickens a week before
the holidays so all we ended up with was a soggy, grey
Christmas! 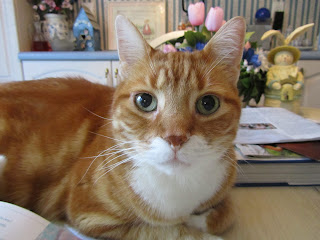 January did not start the year off well for us.  We had
to make the decision that all pet owners dread and say
goodbye to our dear, beloved beautiful boy Rupert.

We were and are devastated!

He was with us for around 14 years and we adored
every minute of it .... even when he broke things,
picked on Phoebe and hogged the bed.  He was a
tremendous character who made friends with everyone
and never met a food type that he didn't like.

We miss him every minute of every day.

Thanks for visiting.  Hopefully I'll be around with
stitching updates again before the end of the year.

Hi Judy! Nice to see your first bi-annual blog post of this year. True - being retired means being busy with all sorts of things, more than you ever thought of while still working, lol.

And you were stitching, which is absolutely great. Pretty Little Toronto is such a gorgeous finish and you are right, a very colourful one. I love colourful designs a lot, particularly in spring when nature bursts into colours as well. Your new start is another great piece, too. I love Jardin Privé.

I recently read about a cat cafe somewhere here in Germany, too. I think it's in Berlin. Great for people who love cats. And the others don't need to go there, if they don't want to.

Allen Gardens must be such a treat, particularly wandering through the greenhouses when it's cold and dreary and snowy out side. It always warms my heart when I see flowers and colours in abundance. And it doesn't matter if they are in greenhouses or outside in nature.

Now don't let pass so much time until your next post :))

Visits from my friends

Books in My Library